Year 5G have been devising and performing four-beat dance patterns with a variety of movements to explore shape and space.

We began by creating squares in the hall with masking tape, naming the directions on the squares and establishing a common language about them.

Next we started the four-beat patterns with simple "copying" of each other's feet positions and moves, where the same shape and movement is simply translated from one square to the next:

We devised our own notations for recording these on paper. 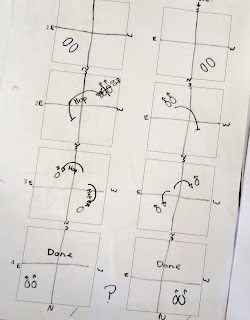 In the second session we revisited our first moves, then we looked at mirror reflection and tried to incorporate this into our four-step patterns.

The idea and inspiration for this activity came from Malke Rosenfield's brilliant "Math in Your Feet" program, though it should be said that ours is a very rough approximation of what is a much more developed and professional program. That said, there were a number of things that were really impressive about what the class did:
In this connection, it's worth watching the video and reading "What Success Looks Like" on this page on the Math in Your Feet site.
We used Malke Rosenfield's Movement Variables chart (which she includes in a really useful article here) to help consider some of the elements that should go into our patterns, and also to help record these patterns: 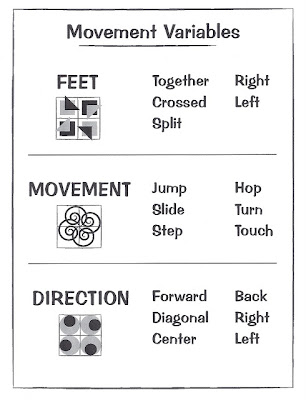 Altogether, it was a fantastic approach to maths learning, which we will hopefully refine and extend in the future.
Posted by Mr Gregg at 15:46