Another maths "manipulative" (as they called them in the US - I'm not sure what the equivalent British term is). This time the pattern block, invented in the 60s, if something so simple can be said to be invented: We got them out. Not just ours, but everybody's on the primary corridor. We'd been looking at Islamic patterns, and a good way to create our own was to use the blocks.

Luckily - because it would be hard to do it on paper - there's an online way to record, and extend what was done by hand with the blocks, and to save the images and publish them to the web.

We made the distinction between pattens that could potentially continue for ever, and ones that are growing from a centre but which perhaps can't be continued outwards indefinitely. There's something very compelling about those mandala-like patterns that grow from a centre and some of the class were reluctant to switch to a repeating and infinitely repeatable tessellation.


Next, we had a look at a few of the dodecagons it's possible to make with pattern blocks. Everyone made their own "badge", their own dodecagon.

(I liked the idea of making physical badges, and if the school had a badge maker I would have done it.)

We paused to look at the symmetries in the dodecagons. They have different numbers of lines of symmetry. Some with no reflective symmetry have rotational symmetry.

Three of the pattern blocks have areas that are multiples of the triangle's area. So that leads on to considering fractions. It's also worthwhile to look at the angles, seeing how many of each shape can fit around a point.

And finally, we touched briefly on the idea of a geometric proof. As these two dodecagons below have the same area:

how would you break the first up and remake it as the second? You'd have to swap a square for two thin rhombuses. So we've demonstrated the relative areas of these two.
Posted by Mr Gregg at 20:01 No comments:

In Year 5 we've been getting some of the classic bits of maths equipment off the shelves and dusting them down. Things like the cuisenaire rods, invented by the Belgian teacher Georges Cuisenaire in 1931 and recommended to the world by Caleb Gattegno in the 1950s. They seem to get talked about less these days, as a Google Ngram check shows: 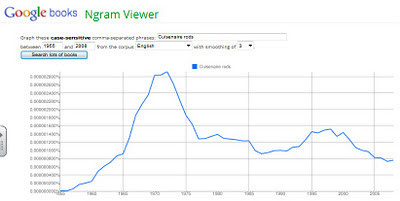 But even if they're less fashionable, it's still worth seeing what they can do... 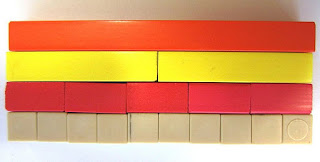 In Year 5 at IST we used them to investigate the "walls" of numbers. So, with ten for instance, what layers of the wall can you make out of just one colour? In this case there's the orange ten itself, the yellow fives, the red twos and the wood-coloured ones. The layers, of course, are the factors of the number. And it soon becomes apparent that some numbers only have themselves and one as factors: the prime numbers.
In fact using the cuisenaire rods now makes more sense than it did in the past. You can easily make a record of what you've done with the rods online. The cuisenarie environment here does the job very well.

If you're at IST you can see a video of some of the Year 5 children explaining prime numbers using the cuisenaire rods as examples here (you'll need to sign in to your Google Apps account).

As a footnote, it's fascinating watching how Caleb Gattegno used Cuisenaire rods in this film of a model lesson from 1961: 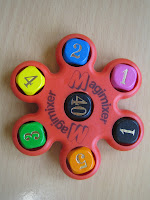 (The idea is rather like the 2012 game - you use any of the 4 operations and must include all numbers in order to make the target.)

This left us asking the question, 'Is it impossible because it is prime?'
Maybe someone can tell us.
In the meantime we'll try some other primes with the same numbers...
Posted by Isobel Patrick at 09:35 6 comments:

Email ThisBlogThis!Share to TwitterShare to FacebookShare to Pinterest
Labels: Primary 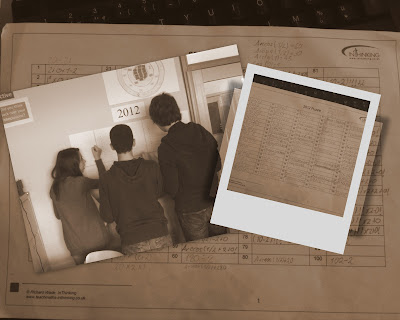 Students at the IST have started the new year with one of our favourite number challenges - the 2012 puzzle. In this puzzle students have to try and calculate all of the numbers from 1 to 100 using the digits 2, 0, 1 and 2 only.  Each of the 4 digits can only be used once and they must all be used. Add, subtract, multiply, divide etc are all allowed along with some other operations like square root, inverse sin, cos and tan, recurring decimals and factorials! Full details of the game and a game sheet can be found at the link above to the game.

This is a fantastic puzzle because of they way it invites students to think laterally when they get stuck! Everyone can get a start and everyone has a challenge. Students have been working on their own solutions, but have been sharing them on a more public display! Solutions can now also be submitted through the website! One student has been given a commendation for finding solutions to 84 out of the 100 numbers and whilst some of these still need checking, this is looking like the best entry so far! How far can you get? Do you think any of the numbers are impossible? Comments, thoughts and contributions are welcome below! Happy puzzling!
Posted by Unknown at 17:16 2 comments: